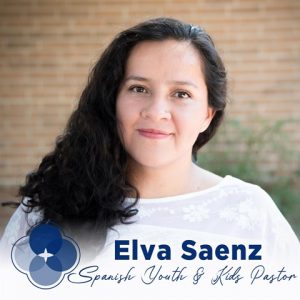 Elva Saenz was born in Mexico City.  She graduated from Universidad del Valle de Mexico in 2006 with a BS in Clinical Psychology.   In 2007, she started working in Education and was a teacher for 2 years while attaining a Bachelor Degree in Early Childhood Education.

She grow up in a Catholic Church and met God when she was 15 while in a youth group, accomplished the sacraments and then served in the youth group for 5 years. She was the leader for 2 years and says that was one of the most exciting and beautiful experiences in her life – but the Lord had different plans for her and she accepted Christ as her Savior in 2012.   She and her husband were baptized in 2013.  “We took the best decision ever: Follow Jesus!”

She enjoys going to the gym, running and practicing yoga, eating sweets and baked goods, spending time with her kids to understand what kids at church need from her, Skype with her mom, Coke and watching Mexican series.  She and her husband love to do crafts and spend most of their time creating things for church and their kids and now have a small decoration business named “La Casa de Carton” where they create a lot of things made out of recycled cardboard.