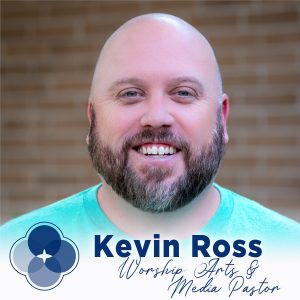 Kevin attended college at Point Loma Nazarene College (now University) in beautiful San Diego, California from 1991-1996. It was there, while attaining his Bachelor’s degree in music, he met his incredible wife, Heather. Between her beauty, her vocal talent, and her love for God, he had no chance…

Beginning in 1995, Kevin has been a full-time worship leader for over 22 years in California and Texas churches ranging from 200 to 2,400 in attendance. Starting September of 2017, Living Word Church is the 5th church he and his wife have served in and they are excited about the journey ahead here.

Kevin & Heather have two beautiful children – Amy (17) and Connor (7). Both are proudly and lovingly adopted. Because of their adoption journey with Amy & Connor, they feel God has demonstrated to them with incredible beauty what it means to be adopted into the Kingdom of God – to become joint-heirs with Jesus. What an incredible and awesome privilege to be called sons and daughters of God!

Kevin’s musical skills specialize in piano, keys, and vocals. He also plays guitar, and mandolin. He is skilled in graphic design, photography, video production, stage design, theater production, as well as audio and recording engineering. Kevin is an avid stream fisherman and a long-standing, die-hard fan of the Denver Broncos and the San Antonio Spurs. He enjoys playing golf, volleyball, and of course all things creative.