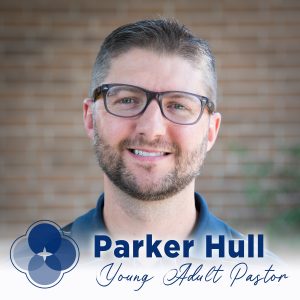 Parker Hull joined the staff at Living Word Church in April 2014. He is married to Missy and has two beautiful blonde headed little girls named Jemma and Addie. Parker grew up in Lubbock, TX and was called into youth ministry as a High School student. Because of the influence of his youth pastor, Parker realized that you could be a Christian and have fun at the same time. He also realized that life apart from God was meaningless. Parker pursued his call to full-time ministry by attending Southern Nazarene University for a BA in Ministry and Theology.

Parker graduated from Southern Nazarene University in Bethany, OK in 2006. After college, Parker and Missy moved to Little Rock, AR for 8 years to serve as Youth Pastor at Calvary Church. As a Youth Pastor, Parker began working with young adults as they graduated from the youth ministry. He began putting together Young Adult Sports Teams for Softball and Basketball, opening the gym weekly for open gym basketball and developed a growing interest in ministering to young adults.