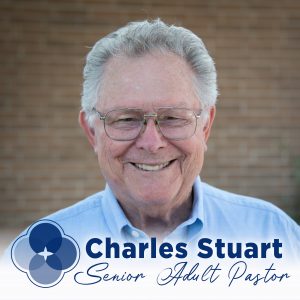 Charles was the only child born to Charlie and Emma Stuart. His parents divorced when he was about four years old. Both parents married new spouses. His dad died in the battle of Guadalcanal during the Second World War, when Charles was nine. His mother passed away in 2013 at age 94. Judy, his sister, is a widow who lives in Bethany, Oklahoma. His sister Linda is married and lives in Texas. His sister, Charlene lives here in Houston.

Charles repented and received Jesus into his heart at the age of eleven and was sanctified at age fourteen on his door-step. At age of sixteen Charles discerned that God was calling him to preach. Before going away to college, Charles preached in several churches in Austin and twice in county jail.

After three years study at Southern Nazarene University, Charles married Carolyn Dodgen of Austin, Texas. They stayed in Bethany while Charles worked and attended classes toward completing an AB degree. Following that they stayed another year while Charles completed class-work on a THB degree.

Charles took a pastorate with the hope of finishing a paper toward completing that last degree. But that did not happen. The pastorate was a full-time job and their first child was born. However, about 30 years later Charles earned a Master of Ministry degree from Southern Nazarene University. Charles pastored in Oklahoma, Missouri, New Mexico and Texas. Rockdale, Odessa, Dennison, Dallas, Port Arthur and Houston are the Texas cities in which he pastored.

For eight years Carolyn and Charles was on staff at Nazarene Indian Bible College located in Albuquerque, New Mexico. Carolyn worked in the business office as accounts receivable and Student Loans Officer. Charles was Student Life Director and in addition, for over a year, served as interim Academic Dean. Moreover, Charles served as an instructor, with a teaching load of from 3 to 5 classes a semester.

October 2019, Charles will celebrate twenty-one years as minister to senior adults here at Living Word Church of the Nazarene.

Dianna and David have a boy and twin girls, Danae and Danielle. Danae is married to Max Townsley and just graduated from college this year (2019). Danielle is engaged to be married to Josh this October. Zach is married to Jennifer and is a graduate of Pepperdine practicing law in Dallas, Texas. They are the proud parents of three children.