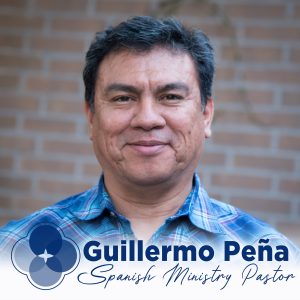 Pastor Guillermo Peña was born in Guatemala City and attended Nazarene Seminary of the Americas in San Jose, Costa Rica, graduating in 1990 with a Licenciatura in Theology on Pastoral Care. There, he met Luz M. Coto, and they married in 1990 and remained in Guatemala City for 6 years after graduation. Guillermo and Luz are the parents of two children, Natanael & Irene Pena. During their years in Guatemala, they served in the Church of The Nazarene Zona 6. Guillermo served as a full time pastor and Luz Maria worked for CEDPCA (Pastoral Center for Pastoral Studies in Centro America), providing education and training for pastors and lay leaders with different denominations.

In 1996, they both moved to Houston and were ordained as elders in 1998 in the Houston District. In 1997 Rev. Guillermo started the Spanish Ministry with Spring Branch Nazarene (now Living Word Nazarene) where he still serves as a pastor. He has collaborated with the Houston District in providing ministerial courses to lay Spanish speaking leaders. He also served as the Coordinator for Spanish Ministries pastors in Houston and has served as a District Board Advisory member. At the present, Rev. Peña is participating in a Master’s Degree program with Olivet Nazarene University. In 2014 Guillermo received his Masters degree from Olivet Nazarene University.