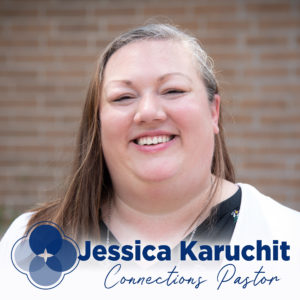 Jessica was a college student planning on a teaching career when God changed those plans and called her into ministry.  She attended Lewis University in Romeoville, Illinois, where she received her Bachelor’s Degree with concentrations in music and elementary education.  While in college, she interned and eventually became part of the Worship and Children’s Department staff at her home church, Chicago First Church of the Nazarene, in addition to teaching a variety of music lessons in their Arts Academy.  Upon graduating from college, she accepted a job as one of the Elementary Children’s Pastors at Grove City Church of the Nazarene, a church of 4,000 in Grove City, Ohio.  It was here that she met and fell in love with an outgoing, quirky Middle School Pastor named Andy Karuchit.  They were married in 2009 and have been partnering in ministry together ever since.

Not long after Jessica and Andy were married, she received an invitation to come back to her home church, Chicago First Church of the Nazarene, as their Children’s Pastor.  They spent 5 years back at Chicago First Church and during that time, had their son, Drew.  In 2015, Andy was invited to join the team at a church plant in North Dakota.  The Karuchit family took a giant leap of faith and moved to one of the coldest places in the continental U.S.!  During that time, Jessica worked as a Childcare Director and an HR and Safety Specialist for a manufacturing company, while serving as a worship leader and communications coordinator for their church campuses in Grand Forks and Grafton, North Dakota.

In 2018, Living Word got connected with Jessica’s husband about the Children’s Pastor position here and Andy started in July of 2018.  In January 2019, Jessica was also hired to explore the possibility of opening a childcare center at Living Word.  Unfortunately, the childcare center did not come to fruition, but as time went on, she became the Office Manager and eventually began taking on more of our discipleship and assimilation processes.  She is currently the Connections Pastor overseeing communications, hospitality, assimilation and discipleship.  If you’re new to Living Word, she will probably be one of the first people you meet!   Jessica loves connecting with guests and seeing people grow in their faith.  She leads a women’s small group and you may catch her on the platform singing with the worship team from time to time.